Free oximeter with a purchase of €49.99!
Animal health

Does your dog have a dry, cracked nose? Let’s have a look at the causes and remedies

It is commonly known that the nose of a healthy dog should be moist and hydrated, while a dry nose may be a clear symptom of a disease, such as the much dreaded Leishmaniasis.

Actually (and fortunately), dryness and dehydration of the so-called 'truffle' are not always a sign of a health problem but, rather, an indication of something much simpler and solvable.

One thing is certain: a dry nose, which cracks very easily, can become a major problem for our four-legged friends.

Causes of a dry nose in dogs

A dog's nose is moist because it is covered with a thin layer of mucus, which helps the animal to smell. The truffle is often very wet: in fact, dogs do not have sweat glands like us, but sweat from their noses and paw pads.

As a rule, the so-called 'truffle' should always be moist, although certain situations may cause it to dry out. Some are worrying, others much less so.

Here are the most common causes of a dry nose in dogs:

That said, if your dog has a dry nose try to remember how long he has had this problem for? A few hours? A few days? A few weeks? Has he spent time in the sun or near a heat source, such as a heater?

Has he taken a walk in the winter cold?

Hasn’t he had a drink for a few hours?

Often, the cause of a dry nose is nothing really worrying, but rather a temporary and easily solved condition. There are cases, however, when it would be better to take your four-legged friend to the vet.

When should we worry if our dog has a dry nose?

Dry skin on the nose may not be a problem if it is the only symptom your dog is showing or if the condition disappears in a short time.

If, however, your dog shows symptoms of discomfort (such as tiredness and lack of appetite), or has cracked skin elsewhere on the body, then it would be best to take him to the vet for a consultation.

To dispel some of your doubts and, hopefully, also some of your worries, here are the main symptoms of the canine diseases mentioned above, which can  lead - but are not limited to - a chapped nose:

Does your dog present any of these symptoms or, more generally, does his dry nose seem a rather strange condition to you? If so, we advise you to see your vet or veterinary surgeon to get their opinion and, if required, schedule some tests.

If, on the other hand, the dry nose is just  temporary or genetic condition, then you can do something to relieve your four-legged friend.

If your dog is predisposed to truffle dryness or has been affected by high/low temperatures,  you can adopt specific behaviors that can help him:

A dog's chapped nose, or simply a dry nose, can depend on numerous factors.

Very often it is a temporary but potentially annoying condition. It can therefore be treated by using a specific moisturising cream and taking appropriate measures.

If accompanied by other symptoms, such as debilitation and lack of appetite, dryness of the nose could be a sign of a canine disease.

Only a veterinary doctor can best analyze the situation: if you have any doubts, consult him without fear of overdoing it!

Disclaimer: the information provided in this article represents general indications and in no way replaces medical advice. 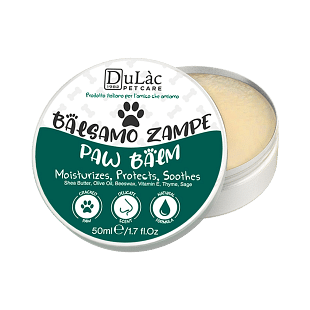